To build the first inter-connected ecosystem of EV Charging, 5G Connectivity and Consumer Engagement that adapts to each individual’s preferences to provide a richer mobile experience.

Founded in 1979 originally as mPhase Technologies, today mPower Technologies Inc. can best be described as a technology company focused on consumer engagement using data analytics and artificial intelligence to create a monetizable link between consumers and retailers at opportunistic times and places. The company is currently building a connected ecosystem of EV charging, 5G internet connectivity and software solutions that optimize consumer engagement within the framework of a SaaS/TaaS model.

Branded under the mPower name, this ecosystem will empower the way people shop, dine, fuel and interact with the world to create a richer life experience. The mPower ecosystem is tailored to each individual’s tastes and needs, with particular emphasis on empowering tomorrow’s green consumer. mPower also has data driven business units generating recurring revenue outside of its consumer ecosystem, in addition to legacy nano battery technology and a related patent portfolio that are slated for future development.

We believe in the privacy of users, our system connect with a user’s device uses AI and machine learning to algorithmically match offers with the right user, at the right time. We do all of this without ever needing to know the user’s name, or any other PII. 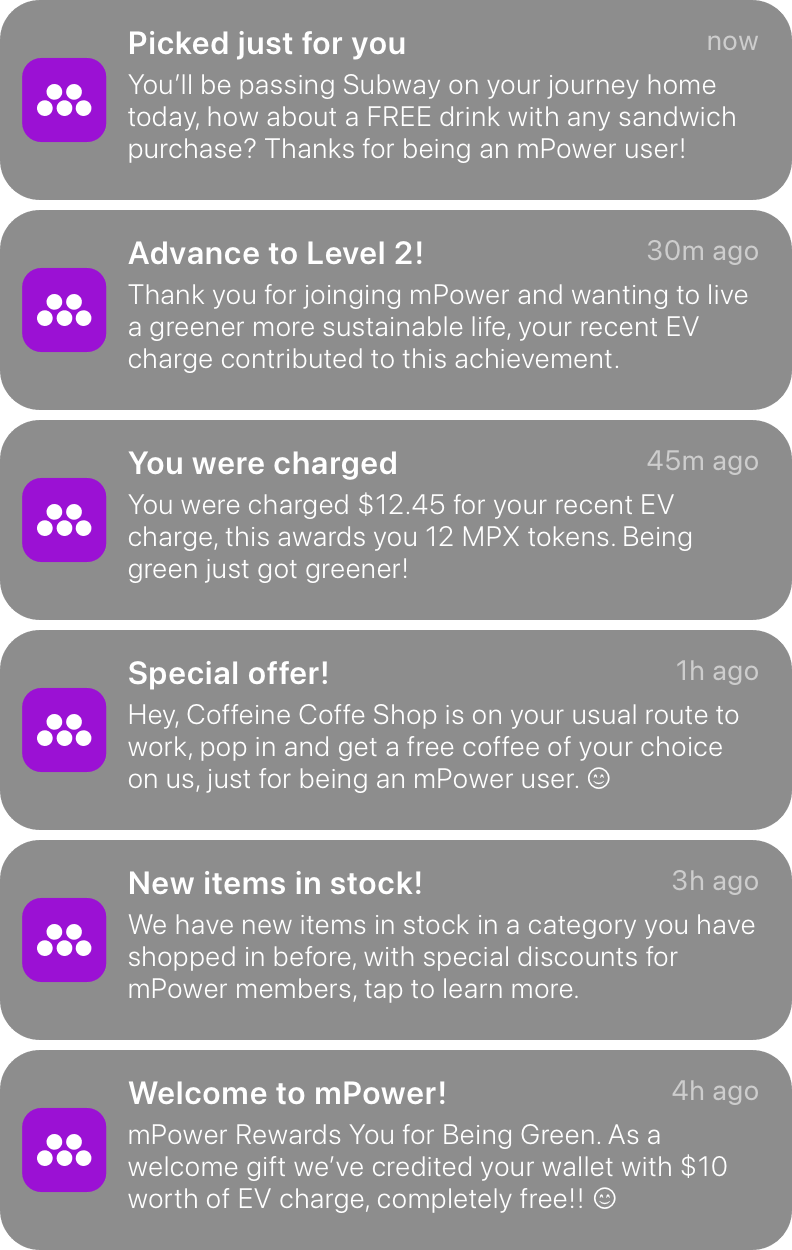 We offer turnkey installation of carrier class millimeter wave 5G and Wi-Fi wireless services that can be 4-5 times faster than common 5G. At mPower, we handle the entire process, from design to installation and maintenance.

For an easy path to ultra-fast 5G: 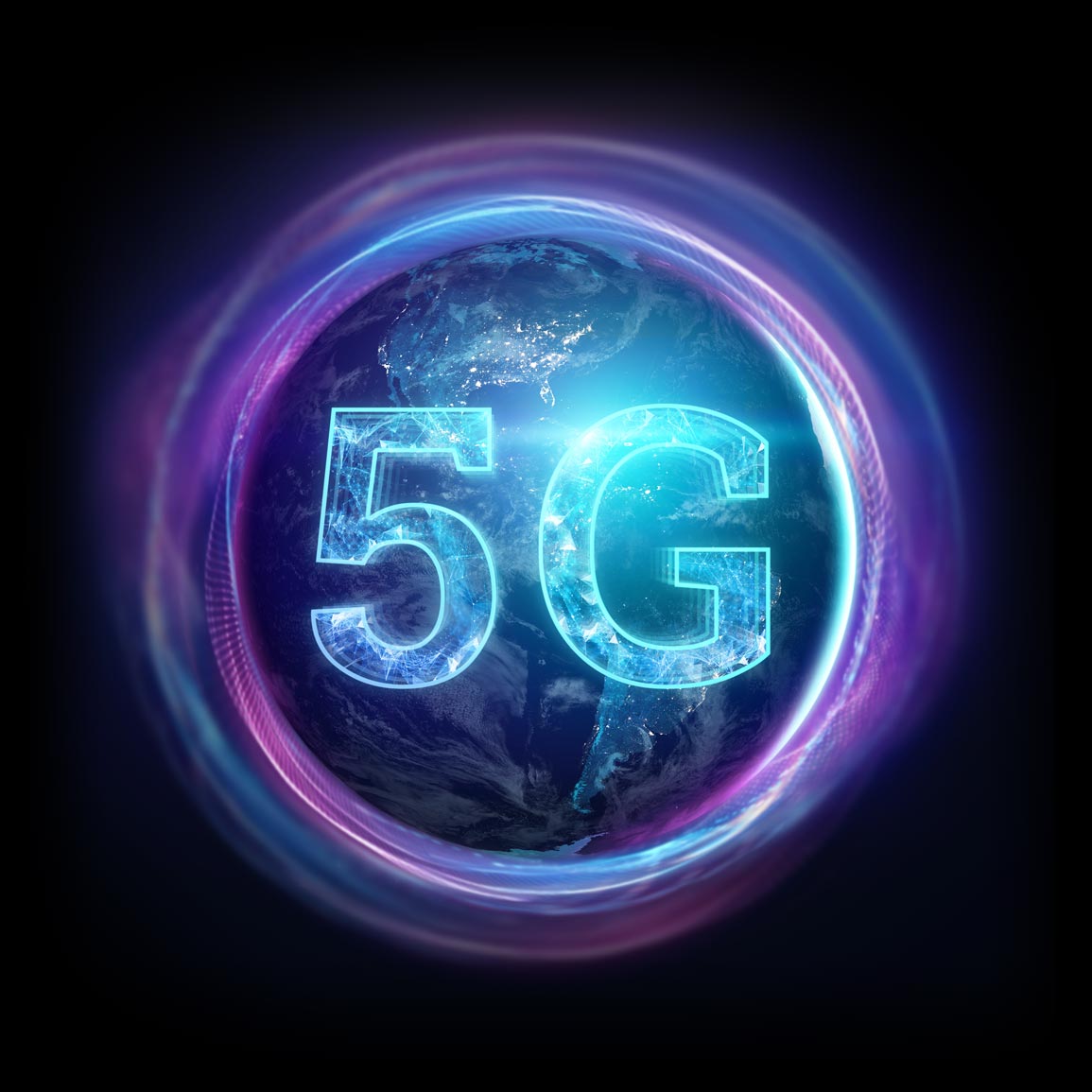 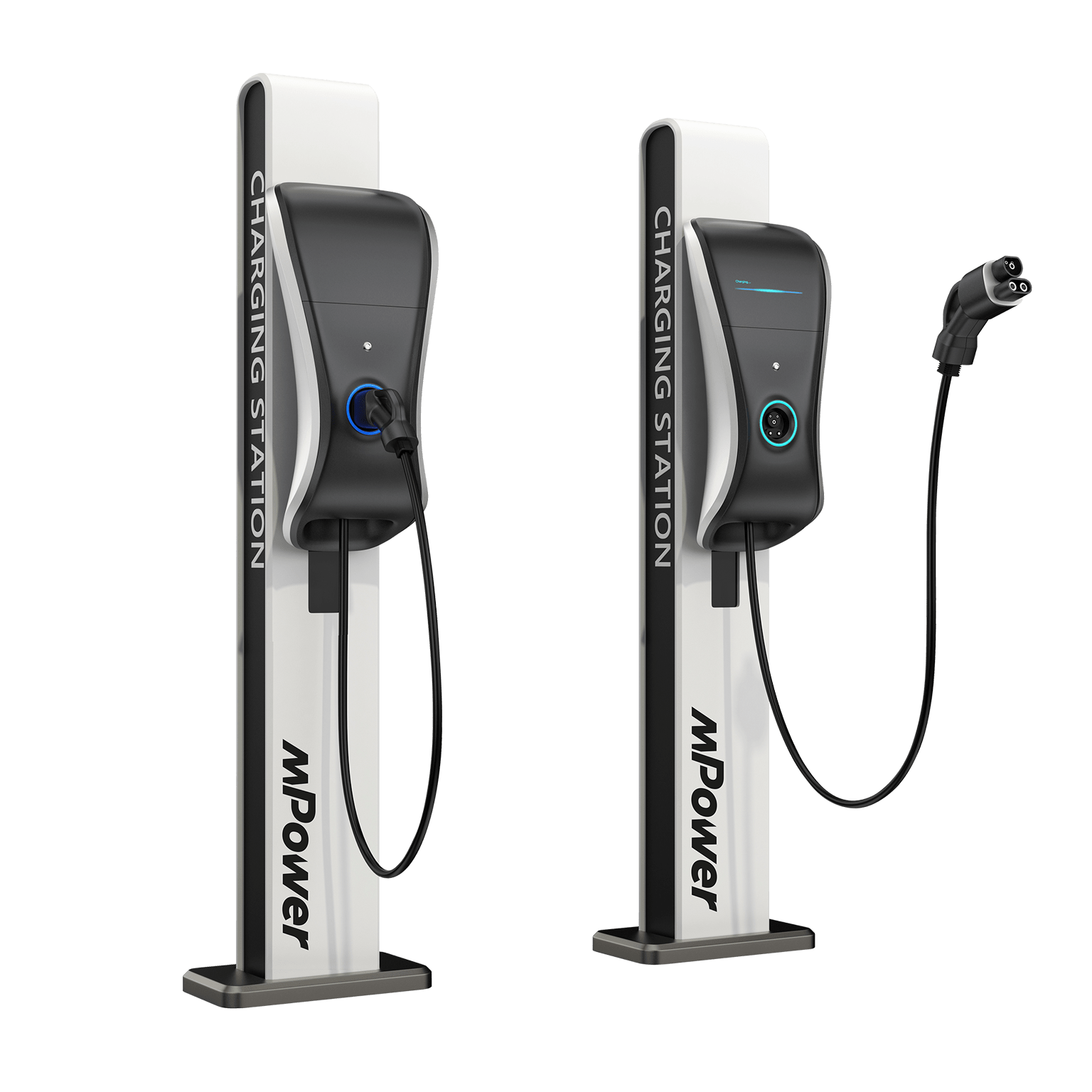 To become part of the first retailer-oriented EV Charging network:

Our patented 21:32 Consumer Engagement platform is a Wi-Fi and app-based program that utilizes AI to create one of the most affordable and effective customer engagement tools on the market today. Our software learns customer preferences, then drives business to your location via promotions and special offers, with the added benefit of time & location-enhanced push technology.

Restaurants, convenience stores & other retailers in need of customer traffic

Both affordable and easy to implement, our proven technology can drive 25%+ customer traffic from a single promotion. To learn more: 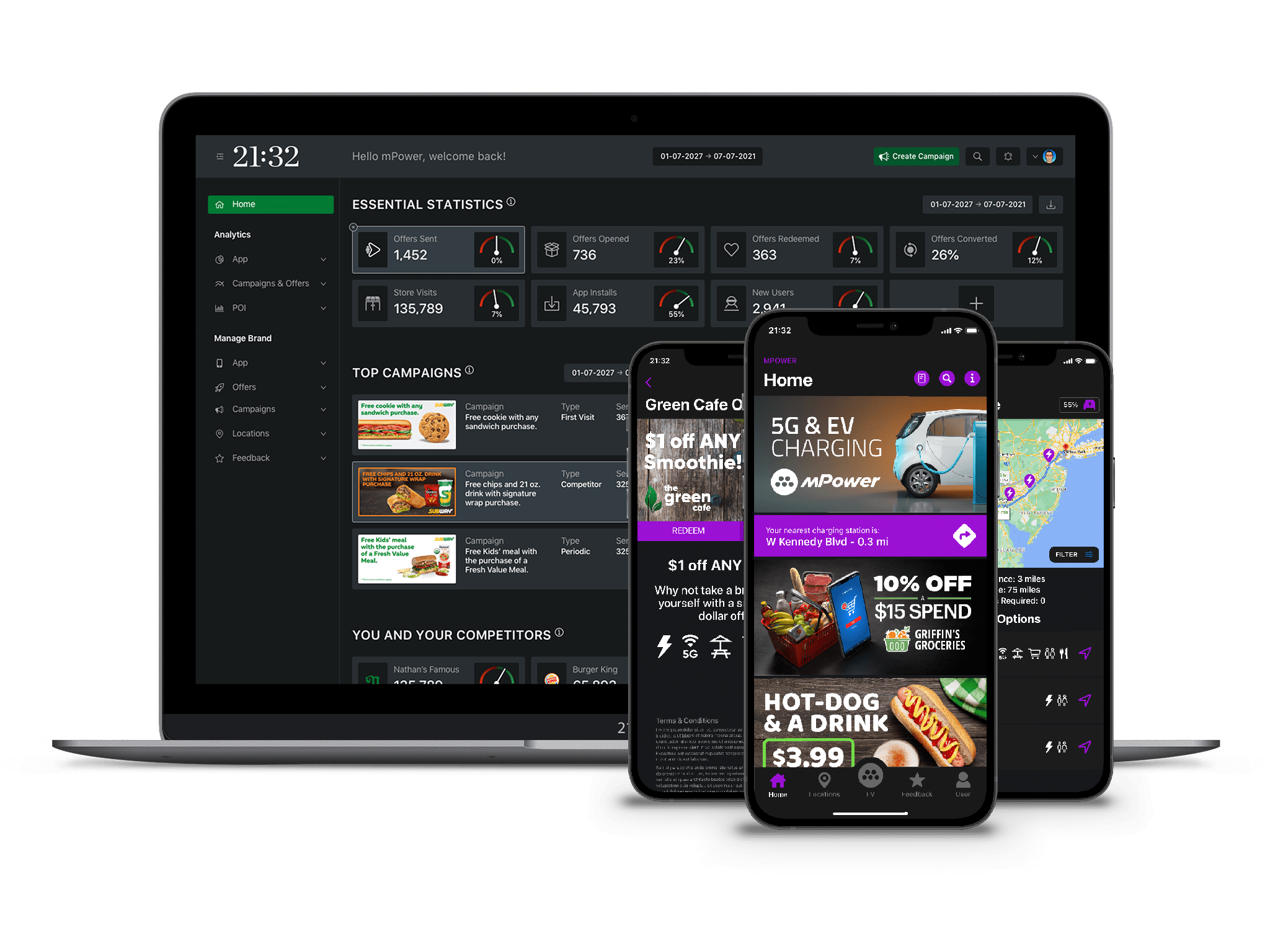 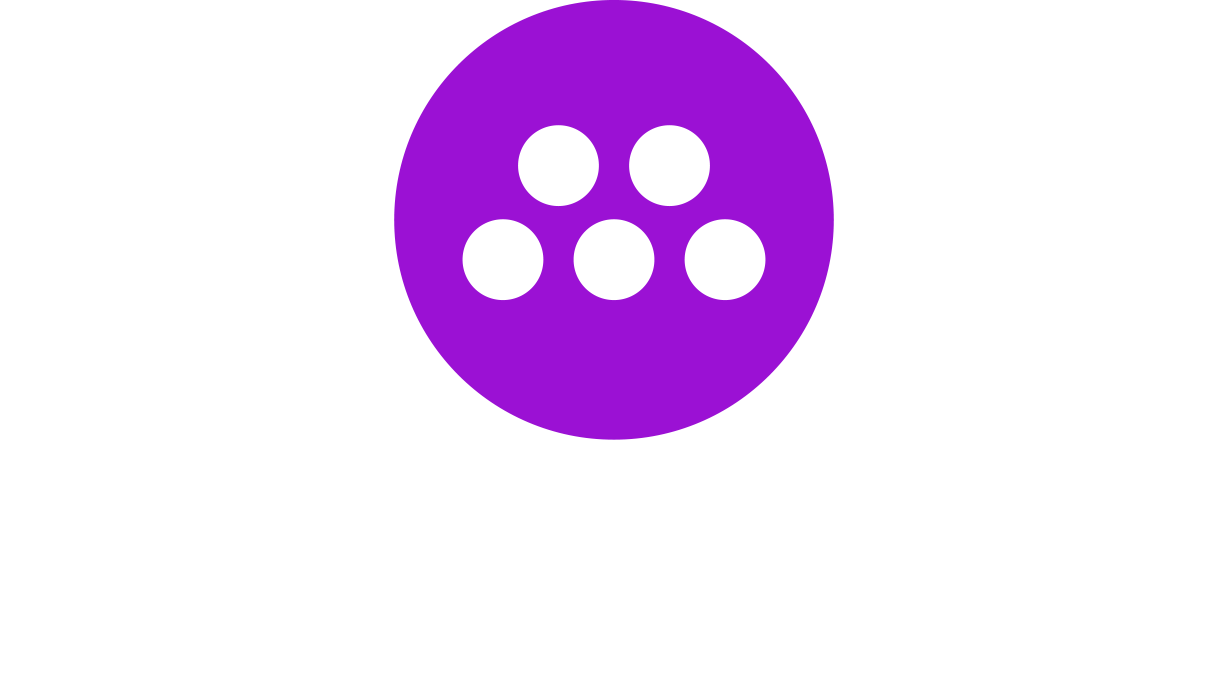 Our complete mPower Ecosystem gives organizations the ability to future-proof for the green- and EV-centric environment that will define commerce over the next decade. Our full stack of services under the mPower platform includes the following: 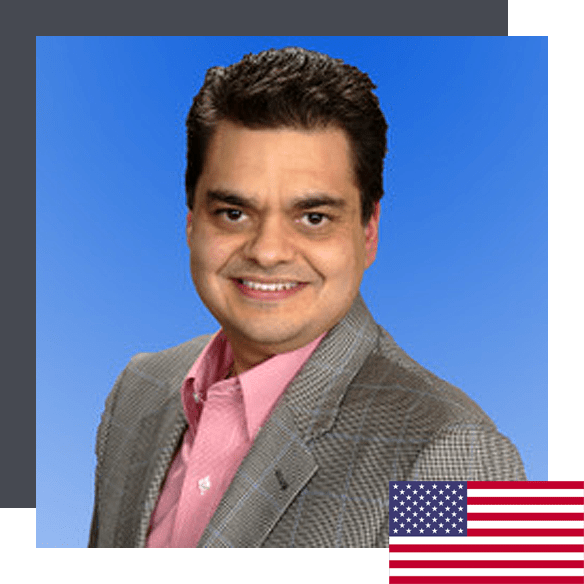 A computer scientist and entrepreneur, Anshu began his technology career working on major federal government projects for Oracle and Computer Science Corp. He eventually formed his own firm (2Pi Solutions) in this space, which was ranked as one of the top 100 fastest growing companies in the U.S. before its sale in 2010. Since that time, Anshu has successfully built and managed companies in the Real Estate, Hospitality and International Food industries. He is also Chairman of a public consumer products company, Verus International (OTC: VRUS). 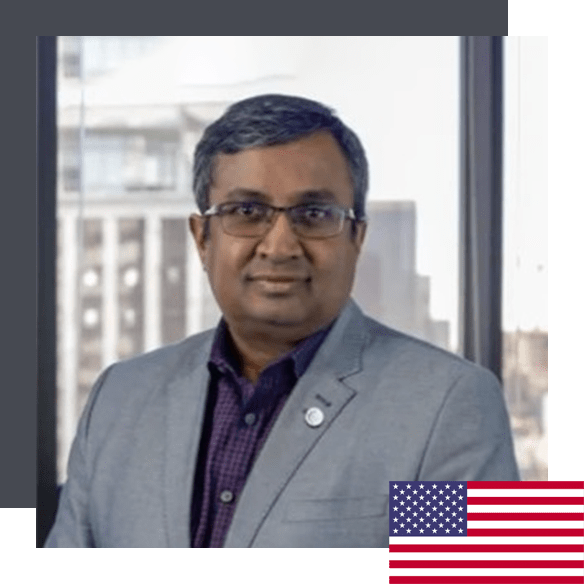 With more than 28+ years of experience in the public and private sectors that began as a ‘C’ programmer, Venkat has held numerous highly visible executive roles. Most recently, he served as the Tech Lead of Healthcare Products, and Practice Lead for Blockchain and Intelligent Automation for CGI, a global consulting company. Prior to CGI, he led IT Operations for a large US Government agency. He has also designed, deployed and managed multiple large enterprise systems in the government, and commercial industries. He has a Masters in Computer Science and an MBA. 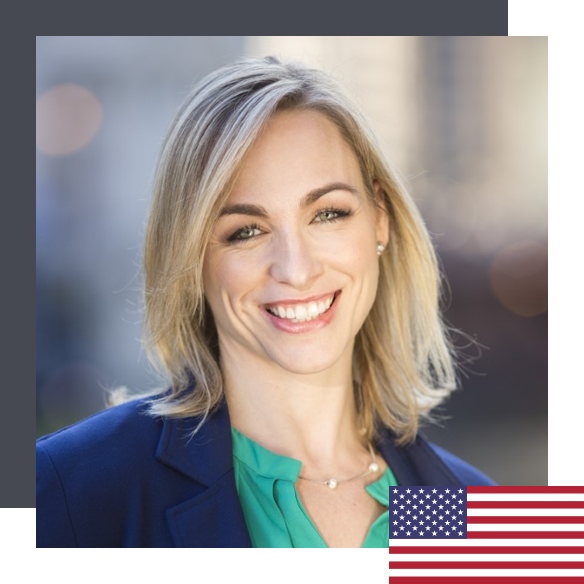 Angelia combines over 17 years of experience in private and public corporate finance in various industries. Until recently,, Angelia was the Treasurer for American Trading and Production Corporation, a company with assets in private equity, alternative investments, and real estate. Prior to that, she was Assistant Treasurer for American Trading and Production Corporation. She has held various finance roles in audit, FP&A, and strategy at Constellation Energy, an Exelon Company, an energy company. Angelia started her career at PricewaterhouseCoopers as an external SEC auditor for Fortune 500 companies in the Baltimore and Washington, DC area. She has an undergraduate and masters degree from the University of Maryland at College Park and an MBA from the University of Chicago’s Booth School of Business. 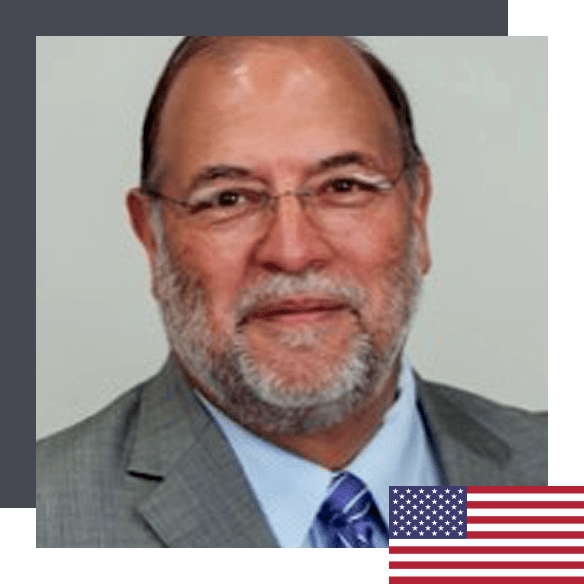 Luis is a veteran HR executive with 20+ years of global experience working with large multi-national companies, including onsite assignments in foreign geographies. A recognized leader in HR practices, he is also active in teaching, both as an Adjunct Professor at Villanova University’s Graduate Program in Human Resources Development and as an Adjunct Faculty member at the University of Maryland Global Campus. 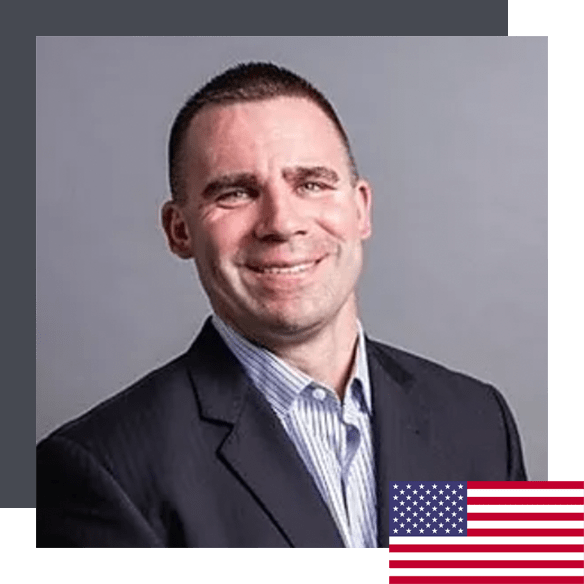 With more than 20 years of experience in public and private corporate finance, Chris has held a number of executive positions across a range of industries, including. COO/CFO of MidAmerica Administrative & Retirement Solutions, a private-equity owned, national employee benefit program provider. In addition to being CFO of Verus Intl., his prior public company experience included Corporate Controller of Carrier Enterprise; Corporate Controller of Watsco, Inc. (NYSE); and Director of Corporate Accounting and Financial Reporting at MarineMax, Inc. (NYSE). 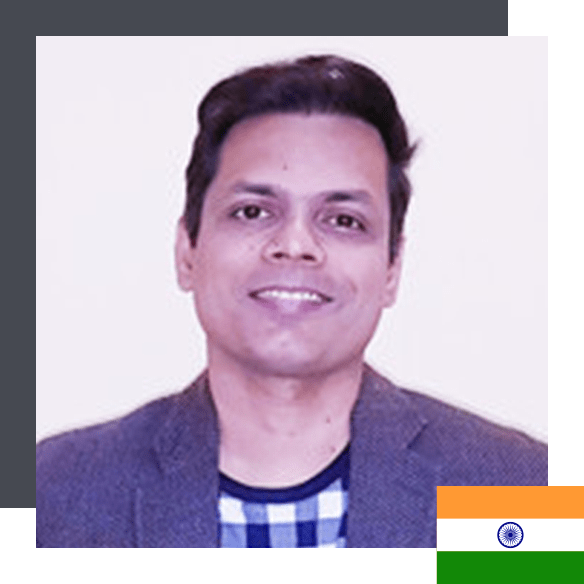 Ram (Travel Buddhi) is an industry veteran with 17+ years of consulting experience with firms such as Tech Mahindra, Aqua MCG and IBM. He has cross-industry and IT experience in banking and financial services, retail,  government, energy, and manufacturing. 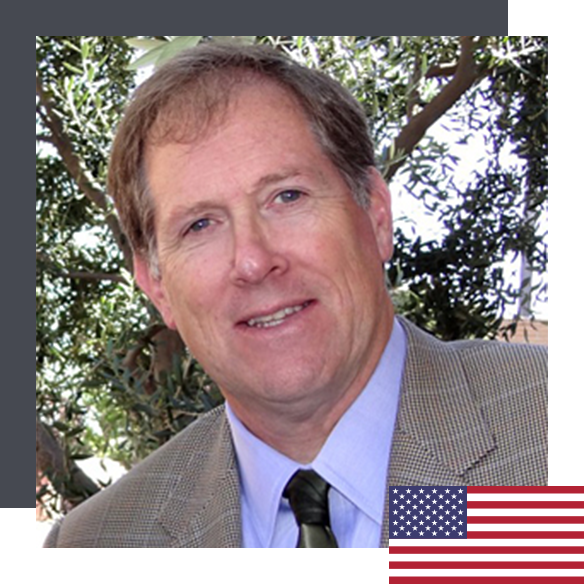 A technology industry veteran, Mark spent the early part of his career in manufacturing, including a stint at Hughes Aircraft’s Electron Dynamics Division. He was one of the financial industry’s first internet analysts and has witnessed and invested in many major technology trends. His experience includes being part of the team that developed and supported one of the financial industry’s first online institutional stock screening systems. Mark’s international experience includes working with private and public companies in Europe, Asia, the Americas and Australia/Oceana. 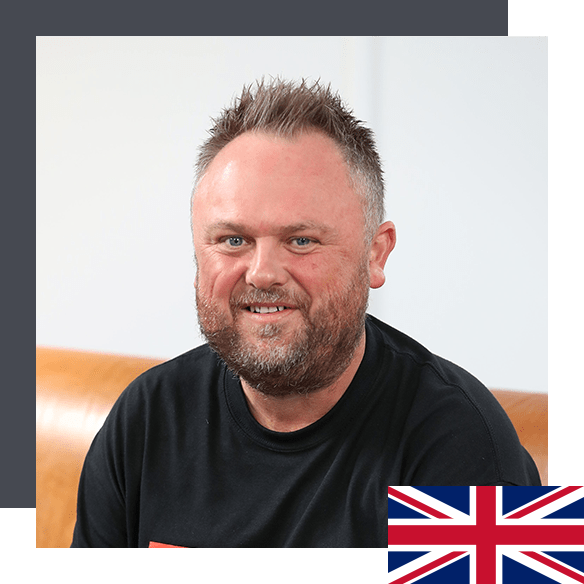 Chris Smith has 18 years’ experience in the digital media industry. In 2005 he successfully took a new Bluetooth product to Poland, secured contracts and set up operations. He then worked on a fan engagement platform for Cardiff City FC helping them win “Family Club of the Year” in 2010. As Technical Director for BMS, he worked with Cardiff City and Sony to install broadcasting software in schools and universities. In 2012 Chris set up his own business, which became CloseComms in 2015. 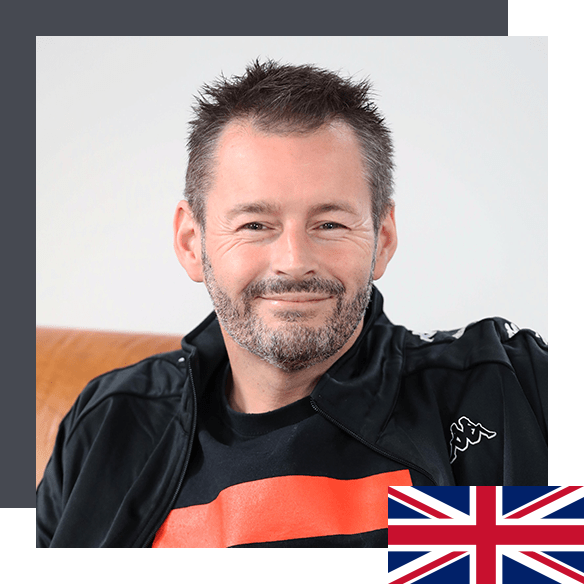 Warren has over 25 years in the creative industries with extensive banking and advertising experience. He is responsible for the brand of all our companies, and moonlights as our UI/UX designer.

Adam has over 20 years experience in IT and is responsible for implementing the development process. He also creates the Android App and is always on the lookout for new tech. 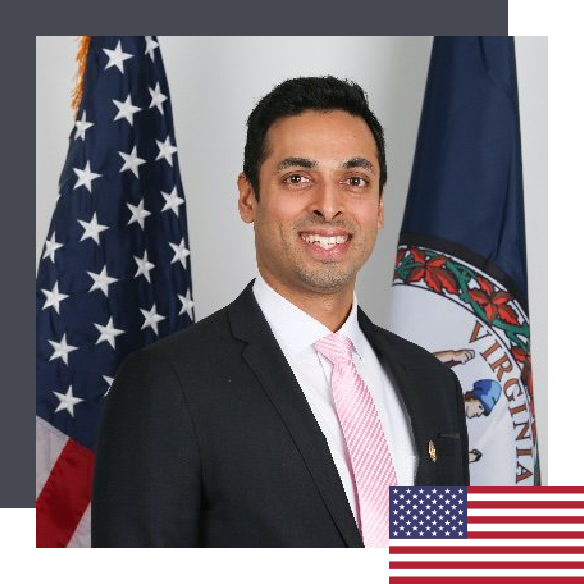 Suhas is a public servant, lawyer, and technology policy expert who currently represents the 87th District in the Virginia General Assembly, where he was first elected in 2019. He was the first Indian-American elected in Virginia’s history at either the state or federal level. He also serves on the Virginia Small Business Commission and Virginia Minority Business Commission as well as the Communications, Technology, and Innovation Committee in the House of Delegates.

Previously, he served as a technology policy advisor in the White House under President Barack Obama, where he ran a task force on technology policy and advised on Artificial Intelligence, cybersecurity, infrastructure policy, and economic opportunity. Before joining the White House, he handled a range of technology and trade issues for major U.S. law firms and served as an advisor to Members of the U.S. House of Representatives and U.S. Senate Judiciary Committee. He is a resident of Loudoun County, Virginia and holds a J.D. from Northwestern University. 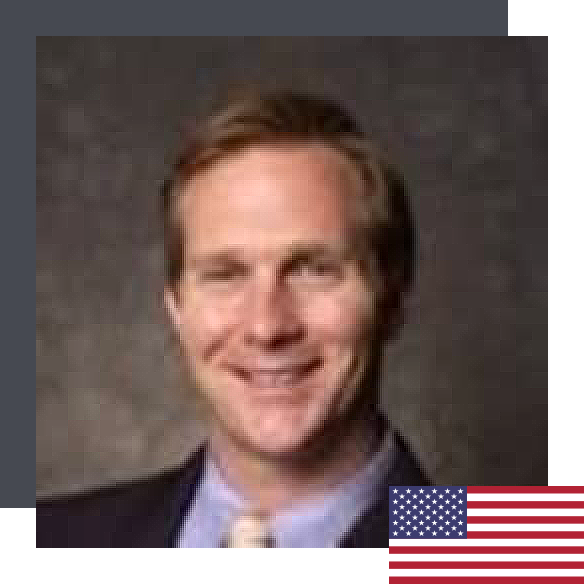 In the private equity market, he is a partner in OneTraction Ventures, which provides a platform for startups with disruptive technology. With more than two decades of financial industry experience in both the public and private markets, he previously held executive positions with UBS, Morgan Stanley, Wells Fargo and Merriman, Curran Ford & Co. 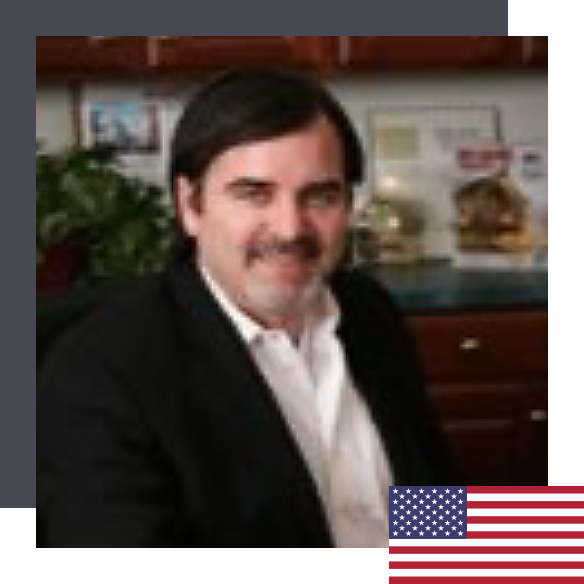 Tom Fore is a multifaceted executive with a long background in real estate development, digital media and entertainment. Currently, he is the co-founder of Digital2Go Media Networks, a mesh network consumer engagement platform; a principal at Tiderock Media, a film production company, and CEO of Sora Development, a mixed-use master development firm with a focus on Public Private Partnerships (“P3 Projects”). He has more than 20 years of experience in the construction and real estate development fields.